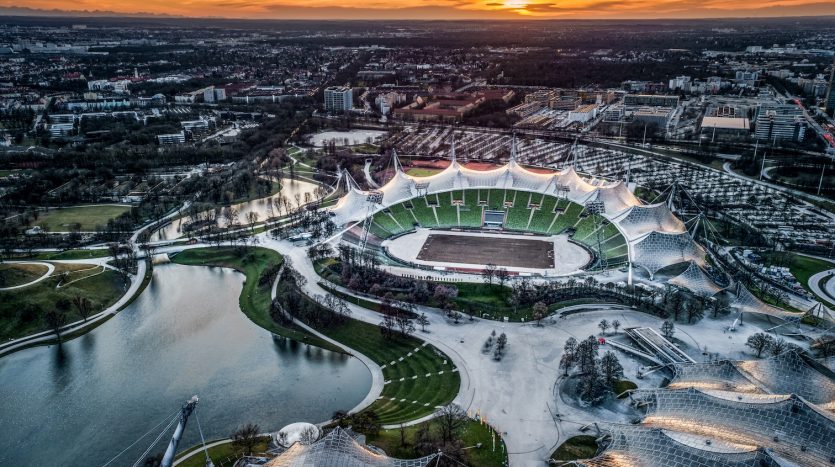 The state capital of the Free State of Bavaria is an independent city and metropolis. Munich lies in the south of Germany in the foothills of the Alps between the Limestone Alps and the Danube on a gravel plain. The administrative centre of the district of the same name covers an area of 31,071 hectares. Munich has excellent connections as a city with over a million inhabitants. Munich Airport is one of the largest hubs in the world. From here, 102 airlines reach 266 destinations around the world. Germany’s second largest airport ranks 9th in Europe in terms of passenger volume – 44.6 million people used the airport in 2017. Munich is also connected to the road and rail networks. Eight motorways provide good connections to Munich. The rail connections have recently been further improved. Berlin can now be reached by train in less than 4 hours. Munich offers an ideal starting point to Paris (6 hours), Venice (7-8 hours), or Prague (5-6 hours). Within Munich, public transport provides a good infrastructure – 2 million passengers from Munich and its environs use public transport every day.

Approximately 1.5 million people live in the state capital. This makes Munich the most populous city in Bavaria and the third largest municipality in Germany after Berlin and Hamburg. Compared to the rest of the EU, Munich’s population ranks 12th, with more than 2.9 million people living in the metropolitan area of Munich and around 6 million in the European metropolitan region of Munich (as of 2015).

Munich is an important business and trade fair location. Large corporations such as Allianz, BMW, and Siemens have their headquarters in the Bavarian state capital. Bavaria’s only stock exchange is located in the metropolis.

Compared to other German cities, Munich has the highest purchasing power with 32,856 euros per inhabitant (Economic Report Munich 2018). The gross domestic product is 75,186 euros per capita (as of 2016). This puts Munich in third place in a city comparison. The city of Munich accounts for 19% of the GDP of the Free State of Bavaria. For comparison: 11.3% of Bavarians live in Munich (Wirtschaftsbericht München 2018).

The unemployment rate in the metropolitan region was 3.1% in 2017, compared with 5.7% in Germany as a whole. One of Munich’s particular strengths is its various branches of industry and new company start-ups (2017: 17,163 business registrations). These are creating a dynamic labour market. Between 2012 – 2017 there was an increase in employment of 15.9%. The individual sectors have been able to increase their value in recent years and exports have risen, particularly in the manufacturing sector. This positive development is supported by planned investments – 1,020 million will be invested in residential construction between 2017 and 2021. This corresponds to 15% of the total investment volume of the city of Munich (Wirtschaftsbericht München). Munich is already one of the most economically successful and fastest growing metropolises in Europe.

Munich enjoys an excellent reputation as a city of education or as a “school city”. More than 126,700 pupils attend 339 schools and about 64,500 pupils use one of the 211 vocational schools. Munich is home to 17 universities such as the Technical University, the Ludwig Maximilian University, and the Academy of Fine Arts. Approximately 120,000 students make use of the wide range of courses offered in Munich. The proportion of foreign students is about 18% (Stadtportal München). According to the Munich 2017 economic report, the proportion of university graduates among the workforce was 32.9%. This rate is the highest in a German comparison.

Munich is a tourist magnet. In 2018, 17.1 million overnight stays were recorded (+9.3% year-on-year). In 2018, 20 new hotels opened in the city area (Stadtportal München). Tourism-related turnover amounted to 7.65 billion euro in 2018. In 2017, 3.17 billion Euro turnover was achieved in the retail trade alone through tourism (Economic Report Munich 2018). The city attracts visitors interested in football and high culinary arts and culture like the Munich Opera or the Kammerspiele. World-famous is the Munich Oktoberfest and traditional things like lederhosen and authentic food. Munich is also a perfect starting point for excursions into the mountains or to Neuschwanstein Castle. Most visitors in 2018 came from the USA (1.2 million overnight stays). Great Britain and Italy (Stadtportal München) rank second and third respectively. Almost 50% of the visitors come from Germany.

Munich offers activities for every taste. The city scores particularly well for its combination of sport and culture. Sports enthusiasts can go hiking, climbing, or mountain biking in the mountains. In the Allianz Arena you can watch football at world level. Within Munich, the artificially generated wave at Eisbach attracts surfers as well as onlookers. From here you can also drift down the river and sunbathe in the English Garden. The English Garden is the city’s green lung, with picnics in summer and sledging in winter. You will also find some of Munich’s most famous beer gardens and the Chinese teahouse. Culinary hotspots are the “Hippocampus” (Italian) or the integration café “Über den Tellerrand”, which won the German Gastro-Gründerpreis. A visit to the Viktualienmarkt is also worthwhile. In bad weather you can spend your time in the Deutsches Museum or the Pinakothek. Munich also offers a unique shopping experience. From magnificent department stores like the Ludwig Beck department store to small boutiques, there is something for everyone here. In the evening, the Bavarian State Opera, the Munich Philharmonic Orchestra, or the theatres such as the Munich Kammerspiele will inspire you.

We would be pleased to provide you with comprehensive information about a property investment in Munich.

The 5 golden rules to rent an apartment quickly